During your stay in Normandy, take the time to get off the beaten track to discover the unusual places on the Cote de Nacre and in Douvres-la-Delivrande. 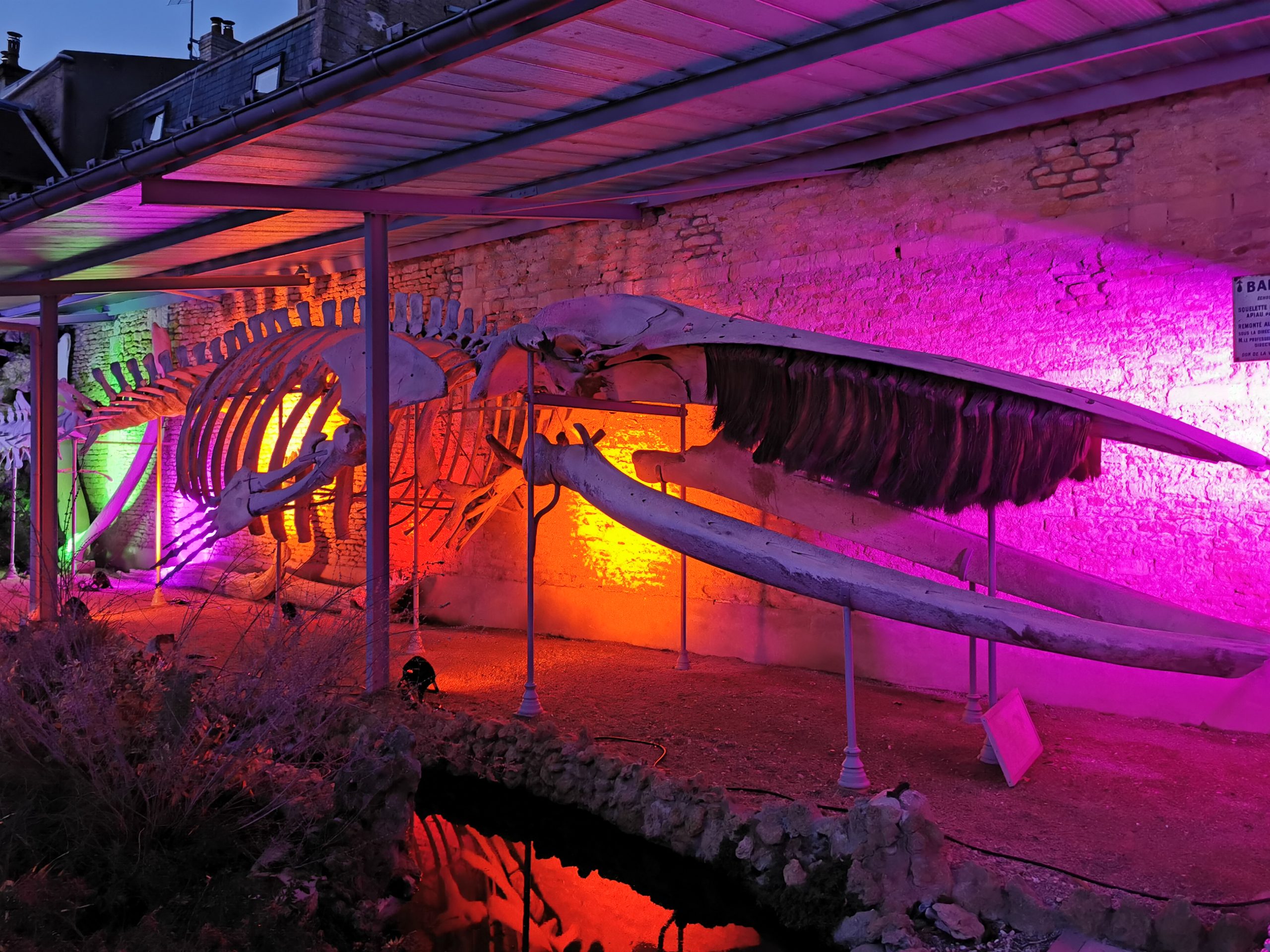 In addition to the must-see places such as the pier at Luc-sur-mer, the port at Courseulles-sur-mer or the alleys at Saint-Aubin-sur-mer, the Cœur de Nacre destination is full of architectural treasures and interesting historical anecdotes.

Known or unknown, it is difficult to present all these unusual places. So we have put together a selection so that you don’t miss out on the most impressive or most emblematic !

The skeleton of the Luc-sur-mer whale

In 1885, a whale weighing 40 tonnes and measuring 19 metres in length washed up on the beach near Langrune. The maritime laboratory of Luc-sur-mer took charge of its observation, butchering and conservation. Thousands of visitors arrive by train at the Luc station to see it: a rotation of 21 trains per day from Caen station after all !

Its skeleton has been on display since 1938 in the beautiful wooded park of the Town Hall of Luc-sur-mer. The whale has become the emblem of the town; the “lutins” (yes, that is the name of the inhabitants!) are very proud of it.

In 1966, a brotherhood of the Knights of the Whale was created to honour those who serve Luc. Since then, the association still exists and aims to promote Luc, its whale and the Maison de la Baleine, which it manages.

for gourmets : The bakery Au p’tit Paradis sells shortbread in the shape of a whale, an ideal gourmet souvenir !

The basilica houses the statue of the Black Madonna. Why is her skin black? Several hypotheses exist.

The place of the present basilica is on the route of an ancient Roman road which would also have been the site of an ancient Gallo-Roman temple, probably dedicated to a mother goddess. This cult would have been brought back to Gaul by the Roman legionnaires, the vast majority of whom were from Africa. They would have adopted a foreign goddess, like themselves, and painted her face brown.

Another hypothesis is that a Black Mother was the symbol of a Celtic rite transformed into a Marian cult by the Cistercian monks.

In any case, at the time of the Norman invasions, the statue disappeared. In the 11th century, one of Lord Baudoin’s sheep began to scratch the ground and unearthed the statue. After many other incidents (wars of religion, destruction of the chapel, etc.), a new Virgin, still with black skin, returned to the basilica built in the 19th century.

Village anecdote : the legend of the “miraculous” Virgin: in 1832, a cholera epidemic caused the death of 80 people in Dover. At the request of the inhabitants and for the first time, the Virgin went out into the streets for her first procession. The epidemic suddenly stopped. For the inhabitants, it was the Virgin who performed this miracle.

The façade of the Lesage Pharmacy, Douvres-la-Delivrande

Have you noticed this beautiful Art Nouveau house in Douvres-la-Delivrande ?

This superb building was built in 1901 by Rouvray, an architect from Caen, and an emulator of Hector Guimard. From the windows to the roof and from the floor to the ceiling, the Art Nouveau style is omnipresent! The picturesque entrance gate with its floral grille, softly-lined windows, glazed tiles and ironwork, all created by Adolphe Marie, a craftsman from Creully.

Note : the interior is also magnificently well preserved: the wrought iron balustrade, the stained glass windows and the ceramic tiles decorated with floral and plant motifs… You could almost forget that you have come to buy your medicine !

The interior of the Maison des Canadiens, Bernieres-sur-mer

Do you recognise this house? Yes, you do! It appears in many films commemorating the D-Day.

It was the first French house liberated during the D-Day landings. Its owner, Nicole Hoffer, is happy to open her door to show you the interior of this Anglo-Norman house: a real Alibaba cave.

Each object on display has an unusual story, each souvenir photo echoes an anecdote, each medal belongs to a veteran whom Nicole knew well and whose memories of the D-Day landings she can tell you about…

to note in your diary : In June, a lantern is lit outside the house, symbolising the return of light. On 6 June, after sunset, the lantern is thrown into the sea in honour of the Canadians who came from the sea that day to give us back our freedom.

The Inukshuk, Courseulles-sur-mer and Bernières-sur-mer

“Inukshuk” means “human form” in the Inuit language. This astonishing pile of stones built by the Inuit in the Canadian north guards a sacred place.

But why do we find them in Normandy then? Well, they were erected in the years following 6 June 1944 in memory of the Canadian soldiers who fell on the Juno sector of the D-Day landing beaches.

They can be found at Courseulles-sur-mer, just beside the entrance to the Juno Beach Centre and at Bernières-sur-mer, opposite the French Island, a stone’s throw from the Canadians’ house. 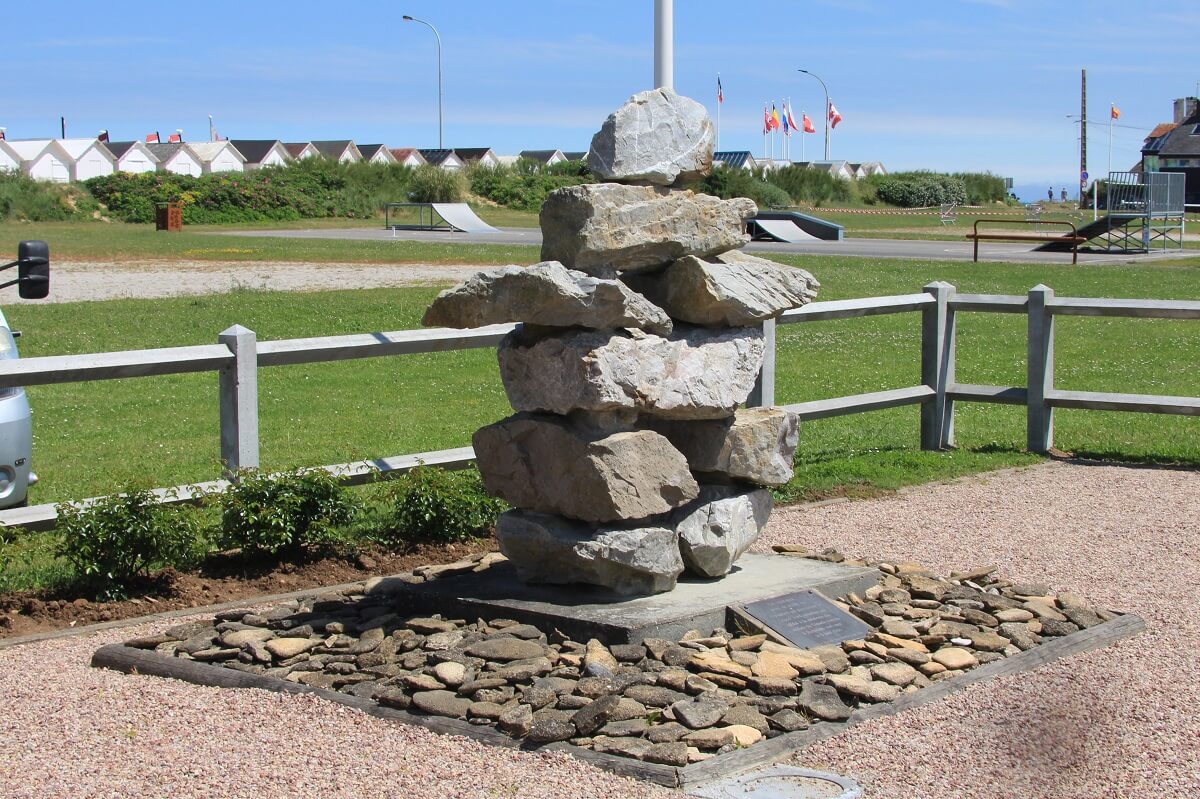 Discover the other sites of interest in Cœur de Nacre

Churches, natural areas, remains of the Atlantic Wall… this tourist map lists around fifty sites of interest in Courseulles-sur-mer, Saint-Aubin-sur-mer, Luc-ur-mer and Douvres-la-Délivrande.